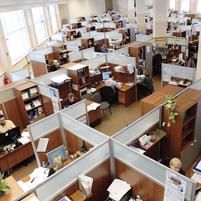 As the great pandemic of 2020 infiltrates every corner of our lives, there is one place perhaps more than any other that has been affected. This is the office, the defining building type of the 20th century whose very existence is now called into question. Offices have been out of reach during the lockdown and must adopt strict new hygiene and social distancing rules if companies are to get back in business.

The media is full of headlines like ‘Death of the office’ and ‘The rise and fall of the office’. The general consensus among commentators is that recent trends in office design and planning are going into swift reverse. For one group of office workers – older workers – this screeching U-turn will not be a cause of regret. Instead, it could be very good news indeed.

Older workers have suffered disproportionately from a general move to high-density open plan space since the late 1990s. I’ve been involved in research which suggests they tend to struggle amid the noise, distractions and a lack of privacy in these environments, although dissatisfaction with open plan offices extends to all age groups.

The big squeeze on office real-estate over the past 20 years – cramming more people into less space – has been sold as necessary to improve collaboration and communication. However, this thinking has been exposed as flawed by a number of scientific studies. Harvard researchers Ethan Bernstein and Stephen Turban, for example, conducted a study looking at communication patterns of employees inside two large corporate organisations making the shift from cubicles to open plan – they found that the level of face-to-face interaction fell by around 70 per cent in both organisations, with a corresponding increase in emailing and instant messaging.

Space efficiency and intensification has been pushed so far in the modern workplace that many organisations now ask whether they can realistically reinstitute office working while controlling the virus. However some researchers, for example Dr Young Lee of UCL, suggest that the six-feet rule around social distancing can easily be accommodated within standard social distancing norms around contact groups which stand at 12 feet – norms which have been disrupted by a corporate obsession with squeezing the assets.

Older workers have not appreciated being pushed around. I once watched a group of senior engineers trying to adapt to cramped new conditions in the vast, anonymous open plan space after being turfed out of their smaller team rooms – their body language, angry and numb, said it all.  Nor have they welcomed new ways of working that aren’t as flexible as advertised – ways that require being physically present, usually after an arduous daily commute, while simultaneously always ‘on’ in the 24/7 digital economy.

The global pandemic has turned things in the workplace on its head. The crisis has made employers, which have been traditionally reluctant to consider remote working, no option but to give it a go. Many older workers have been allowed to work flexibly and skip the commute – with no discernible dip in company productivity.

So, what happens next? Many observers suggest things won’t go back to the way they were before, even when infection rates are controlled. Offices will go through a process of reinvention, becoming more event-based as tightly controlled venues for training, mentoring, innovation activities and face-to-face meetings rather than routine daily work. Remote and flexible working will become a more permanent part of the mix.

If that happens, then there will at least be one small cause for celebration among older workers for whom the coronavirus crisis has otherwise brought nothing but anxiety and challenge.

Jeremy Myerson is Helen Hamlyn Professor of Design at the Royal College of Art, Director of WORKTECH Academy, and a Visiting Professorial Fellow at the Oxford Institute of Population Ageing.