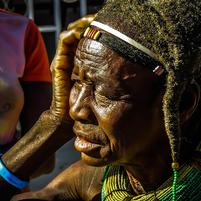 In a recent policy brief on Coronavirus and ageing, the UN’s Department of Economic and Social Affairs declared that the virus mean that the world was grappling with “an unparalleled health crisis.” While on a global level this is undoubtedly true, the fact that in low-income countries large-scale health emergencies are endemic is easily obscured. Yet in the World Health Organisation’s African Region alone, more than 100 major public health emergencies are reported annually, affecting millions of people. Such recurring disease outbreaks are crises that may nevertheless also provide opportunities for learning in the current pandemic, and in particular ways to ensure that older populations are properly included in wider responses.

In recent years the Ebola virus outbreaks (which continue in parts of the Democratic Republic of Congo) have attracted global attention, but many other diseases – TB, cholera, dysentery, malaria and the like – continue to affect large numbers across sub-Saharan Africa. WHO estimates the annual burden of yellow fever at up to 170,000 severe cases and mortality between 30,000 and 60,000. Outbreaks not only create immediate crises which require urgent responses, they also divert public health authorities from tackling other public health issues with an impact on health systems. There is for example, evidence suggesting that during outbreaks of Ebola, significantly higher numbers have died from other diseases than from the outbreak itself.

While these outbreaks by their nature attack whole communities, the risks are clearly multiplied for older people. Poverty, poor sanitation and pollution in informal communities affect all their residents, but older people, particularly those who suffer high rates of non-communicable respiratory diseases, are especially vulnerable. The absence of health services means many older people are likely to have undiagnosed and untreated existing medical conditions. Asthma, tuberculosis and chronic obstructive pulmonary disease (COPD) are prevalent amongst older people, meaning that they are at greater risk from any viral outbreak. In many communities, living in overcrowded accommodation with no access to running water make basic sanitary measures nearly impossible.

That is why public health responses to disease outbreaks need to be inclusive of older people, and those others in the wider community who may be particularly at risk. Experience from responses to earlier disease outbreaks indicates the key importance of primary prevention, which includes effective communication of key health messages and proactive screening in the community. Countries seem to have an uneven record in learning from the past. South Africa, for example, has drawn on experience of response to the HIV pandemic to move quickly on community screening, but may have done less well in engaging with the cultural and behavioural aspects of lockdown.

However, many older people face major challenges in accessing information about protecting themselves and accessing relevant services.  Language barriers, low levels of literacy (particularly among older women), reduced mobility and higher levels of disabilities are all significant hurdles faced by older people. Moreover, the overwhelming majority of older people in low-income countries do not have the same level of access to the internet and other digital technologies, which for many in the wider population have become the normal means by which they connect with family, friends and the community.

In these circumstances public health information and advice needs to be provided through a range of communication channels, languages and formats. Community organisations, which in many countries are already playing a vital role in the COVID-19 response (as the story told in this cartoon shows), need to be involved in this effort. Central and local governments thus need to expand the outreach beyond the state to incorporate community leaders, who have legitimacy with their communities. By enlisting the support of local community leaders to advocate for compliance with restrictions far more can be achieved than by draconian policing.  Again, experience of past pandemics has shown the critical importance of responses which have community consent and cooperation. In many communities it is older people (women as well as men) in community leadership roles who can command a respect that remote authorities would not be able to achieve.

Collaboration between community organisations and governments at central and local level is a basic requirement in any disease outbreak. Basic needs assessments at community level which reflect the diversity of contexts in which older people live can help to ensure that public health measures can be tailored and adapted, avoiding overly simplistic one-size-fits-all policies. Working with local community leadership, HelpAge International has begun to make use of rapid needs assessments (RNAs) to respond to crisis situations. A recent example from Zimbabwe targeted drought-affected areas identified by combined government and NGO teams. A purposive sampling approach was used to select women and men aged 50 and over, combined with methodology to reach older people who might otherwise be hard to find because, for example, of difficulties with mobility. The aim of this approach is to obtain a sufficiently large sample size to understand the needs of older people in different older age groups. RNAs serve the dual purpose of identifying key issues for older populations in crisis-affected areas which require direct intervention, and advocating for the inclusion of older people in the wider provision of governments and international agencies.

However, in the current crisis such collaboration may not of itself guarantee responses appropriate for older people. As evidence from Bulacan Province in the Philippines shows, despite the collaboration of older people’s organisations with local government in the planned response, government strategy focussed simply on ensuring that older people stayed at home. In the absence of guidance about the care and support of older people from either the national provincial government, this strategy has been rigorously enforced in many communities. Confined to their homes, older people are reliant on family and neighbours for their daily needs, medical services and social outreach. The quality of life of these older people is reported to have undergone a marked deterioration in the nearly two months of the lockdown strategy.

Community organisations can also play a role in providing practical support to older community members, especially in situations where public health provision is weak. Older people are particularly vulnerable where access to water is poor and where they are living in crowded households and communities. In these circumstances advice on hand-washing and social distancing is not practical. Local organisations such as this older people’s association in Addis Ababa, Ethiopia have already begun working in collaboration with government providers to deliver supplies of soap to households where older people are living.

However, the contribution that community organisations can make, while it may be symbolically important, cannot match the scale of need.  Clearly it is national governments in LaMICs, with the support of the international community, which will need to lead the response. Nor are they lacking in tools with which to work. Measures such as the scaling-up of social protection programmes, notably of basic pensions, are already being introduced in countries such as Bangladesh.

Measures such as these will only be effective if national governments collaborate, and are given adequate external support. At present there is little sign of a unified international response, despite the threat that COVID-19 presents to every nation. This pandemic can be controlled, but only in so far as people act in solidarity with each other. In this context of mutual solidarity, between people of all ages and backgrounds, we need to strongly uphold older people’s right to health, including access to information, care, support and medical services on an equal basis with everyone else.

Very old hailed as super-survivors | The Times
Scroll to top